You are not logged in. Please login or register.

Devel Note: A migration to a better server backend is on hold until I can dedicate enough test time for it. Volunteers would be welcome, actually. --V.S.

So I started up a new Emerald file on my phone, and decided hey, why not LP this one? I really want to Nuzlocke this game, in honor of Hoenn being the region of the original Nuzlocke challenge. So, without further ado, the rules:

1. If a Pokemon faints, it is dead, and must be perma-boxed in a box set aside for this purpose.

2. Only the first Pokemon on each route may be caught. This includes repeats. This rule is instated once I get Pokeballs.

4. Nickname all Pokemon! No theme.

I am indeed a girl, and I call myself "Crewe".

Why do my parents make me ride in the moving van? This seems very mean and unnecessary.

I snag the Potion before leaving.

Mom suggests I head to Birch's house, so I do so and meet Brendan. He offers to catch my a Pokemon like a pal, but then remembers he has more important stuff to do. I wander off and head out to the route, where a poor man is being chased by a Poochyena.

From his suitcase, I take a Treecko! 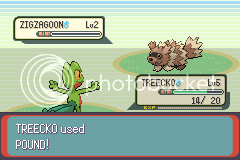 The Poochyena is taken down without too much effort, and I head back to Birch's lab and give my new Treecko a name: Drake.

Drake and I head off to go find Brendan and pummel him into submission. Along the way, we fight some wild mons and Drake gets a level up. We pass through Oldale, and then ON TO BRENDAN!

His Torchic wasted most of its time using Growl, and Drake and I are victorious! Whoo! And Drake leveled up again.

We head back to the lab, where I get the Pokedex and 5 balls. And now that I have Pokeballs, it's time for some new teammates! I grab the Running Shoes, then head up to Route 101. And the first Pokemon is...

A Wurmple! Capture wasn't exactly hard. Her name is Atalanta.

A WINGULL! YES! Drake nearly gave me a heart attack by critting on it, but it didn't die and I quickly added it to the team. Her name is Naiad.

A Lotad! Her name is Lilypad. Drake's quickly been outnumbered by girls.

I think that'll do it for this update. Next time on Crewe's Emerald Nuzlocke... grinding. Lots of grinding.

When last we left off, our intrepid Trainer had just caught three mons and was preparing to train them some before entering the forest. Grinding ensued, during which she entered a new route and...

New teammate: Honey the Poochyena. I was hoping for a Marill, but eh. Before entering the forest proper, Crewe poked her head in to catch another new mon. I figured I'd probably end up with some bug mon, or if I was really lucky a Shroomish or Slakoth, and I was pretty excited, because I like all those mons. So what did I find?

... A mothermukking Poochyena. It was a tough capture, and he nearly took out Drake with a lucky crit, but he was caught and added to the team. I named him after what I was pretty sure at the time was the name of the dog from Call of the Wild.

But hey, there is some good news! Earlier, during the training, this happened!

Unfortunately, then this happened...

Yep. First death and I haven't even hit the forest. I'm doing great so far!

Any way, I then headed into the forest. As a side note, the first mon I encountered after Butch?

YES. I HAVE. BUTCH, WHY ARE YOU NOT A SHROOMISH?

So anyway, I beat up a pirate.

And then grab some items from the ground and skedaddle. Outside, I talk to some dude.

Yoink! Bullet Seed get! I teach it to Lilypad so she can become less useless.

And so I reach that town. Slateport? I can't even remember. Anyways, time for two new team members! On that route to the east of the city...

A Nincada! His name is Lumberjack, after an old in-joke about a ninja hiding in a tree that gets cut down. And then, in the cave... 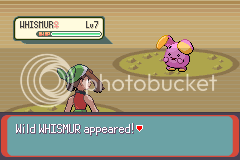 Well, the level cap for this gym is level 15, so time to get all of my mons up to that level! During the training, some things happen.

1) I switch Honey out for Butch, because he's slightly better stats-wise.

8) Welcome to the team, Honey!

Lilypad wipes the floor with the Geodude. Unsurprising. I keep her in against Nosepass, because she has slightly higher Special Attack than Drake. It's an annoying battle, with Roxanne using both Potions, but luckily Rock Tomb is only used once, so Lilypad doesn't actually take much damage. Eventually...

Huzzah! Stone Badge GET! Lilypad even gets a level for beating up her entire team.

After that, there's some plot running off down the road, but first: stuff and things.

Lumberjack (appropriately) gets Cut, and I backtrack some to pick up stuff by cutting down trees. I didn't screenshot all this stuff, but it was basically some X whatevers, I think a Super Potion, an Ether, and a Miracle Seed. I gave the Miracle Seed to Drake, because he needs it more ATM. Then I went over to that ledge by the cave and took on the trainers there. Lumberjack murdered his way through all of them, and then I healed up and went back to the cave.

Yay! Pirate dude runs off, and I return both Peeko and the Devon Goods.

And that's where this update will end. Next week: Mr. Briney!